The global Ultrasound Gels market was valued at USD 88.5 million in 2019 and is expected to grow at a CAGR of 3.0% over the forecast period 2020 to 2028. Increasing number of ultrasound procedures, rising number of new births in Asia Pacific especially in India, Thailand, china is anticipated to drive the demand for ultrasound gels in coming years. Furthermore, rising prevalence of cancer, in North America and west European countries is expected to fuel the demand for gels in coming years. 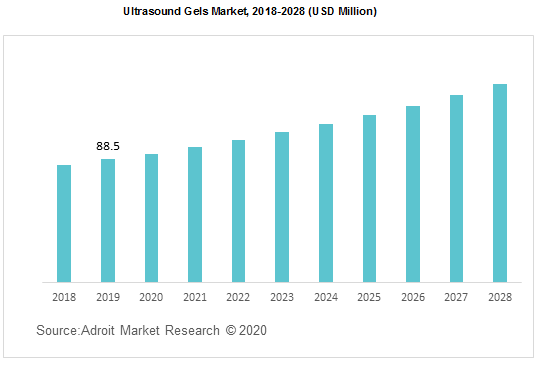 Adroit Market Research report on ultrasound gels market gives a holistic view of the market from 2018 to 2028, which includes factors such as market drivers, restraints, opportunities, and challenges. The market has been studied for historic as 2018, with the base year of estimation as 2019 and forecast from 2020 to 2028. The report covers the current status and future traits of the market at global as well as country level. In addition, the study also assesses the market competition with company positioning based on their product portfolio, geographic footprint, strategic initiatives and overall revenue. Prominent players operating in the global Ultrasound Gels market have been studied in detail.

Geographically, the majority share of the global demand for ultrasound gels was held by North America, followed by Europe, which was the second largest geographic demand. However, Asia Pacific is likely to emerge as the fastest growing segment over the forecast period.