The global Shrimp market is estimated to reach USD 150.2 Billion by 2028, at a CAGR of 6.8% during the forecast period from 2021 to 2028. Growing demand for seafood is one of the major driving factors that help in driving the growth of the market. Furthermore, with easy availability and looking at the nutritional value it is one of the most demand food products available in the market. In addition, an increasing number of restaurants in the Asia Pacific region also assist in boosting the demand for the global market. Rising per capita expenditure coupled with the improvement of living standards in developing countries also synergies the sales of shrimp-based products across the countries.

Shrimps are widely used in the cosmetic and pharmaceutical industries, in addition to the food industry. The shrimp finds its application as sunscreen and anti-aging products. Shrimp contains astaxanthin—a chemical compound called carotenoid that possesses powerful antioxidant properties, which can significantly play the role of reducing the aging of an individual caused due to ultraviolet A (UVA) rays and sunlight. In addition, it increases the likelihood of skin beautification and also assists in removing scars from time-worn faces. Furthermore, it helps in reducing hair loss due to the presence of Zinc and hence used for the preparation of shampoos, as it contains minerals such as zinc that help to reduce hair loss. Thus, major cosmetics manufacturers planned to use shrimp in their products, owing to the multiple benefits associated with it, thereby propelling the growth of the global market.

An unexpected problem hit the ground in a form of the COVID 19 pandemic. The virus first discovered in 2019 in China, and later it spread across the whole world. The demand for healthcare products rises rapidly. The whole world looking after the manufacturing of vaccines. Furthermore, all the employees are forced to do work at home for safety purposes. There is increased demand for food and food-related products. The countries have seen the disturbance in the supply chain and affect the distribution of the products. Looking at the current demand for the products, the demand for Shrimp will remain stable. The COVID 19 pandemic shown no major impact on the Shrimp market.

Based on the type of species, the global Shrimp market is classified into Whiteleg shrimp, Natantian decapods nei, Akiami paste shrimp, Giant Tiger Prawn, Banana prawn, Northern Prawn, and Others. The Whiteleg shrimp segment contributes more than 30% of the global market share in the year 2020. It is widely used in shrimp salads and shrimp cocktails owing to its mild and sweet flavor. Further, the giant tiger shrimps segment is anticipated to record substantial growth in Western Europe and North America over the forecast period. The giant tiger shrimps will grow at the highest CAGR% during the forecasted year.

Based on the application, the Shrimp market is classified into food and non-food. The food segment contributes 6161 Million Tons in the year 2017. An increasing number of restaurants in Asia pacific region esp. in India and China considered as futuristic opportunities during the forecasted year. 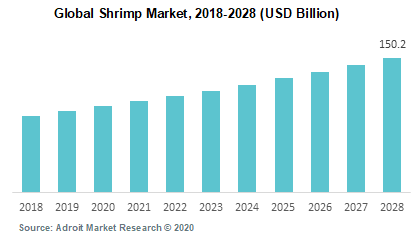 Adroit Market Research report on global Shrimp market gives a holistic view of the market from 2018 to 2028, which includes factors such as market drivers, restraints, opportunities and challenges. The market has been studied for historic years from 2018 to 2019, with the base year of estimation as 2020 and forecast from 2021 to 2028. The report covers the current status and future traits of the market at global as well as country level. In addition, the study also assesses the market based on Porter's five forces analysis and positions the key players based on their product portfolio, geographic footprint, strategic initiatives and overall revenue. Prominent players operating in the global Shrimp market have been studied in detail.

The global Shrimp market report is classified into five major regions North America, Europe, Asia Pacific, Latin America & Middle East, and Africa. In terms of revenue, Asia Pacific holds the largest market share in the year 2020. The region accounted for more than 80% market share of the total Shrimp market in terms of production. Asia-Pacific has been leading the shrimps market for a long period of time. The production of shrimp in China 1,985 thousand metric tons in 2019, compared to India which produce 805 thousand metric tons in 2019 registering a CAGR of 1.5% during the forecast period. The southeastern coastal state of Andhra Pradesh has been the anchor of aquaculture in India. North American and European markets are opportunistic markets for the producer. An increasing number of immigrants from the Asia Pacific region will bring huge opportunities to this region.