The global peripheral vascular devices market was valued at USD 9.0 billion in 2019 and is expected to grow at a CAGR of 6.8% over the forecast period. North America currently holds majority of the market share while emerging economies such as India, China, and Brazil among others are projected to witness lucrative growth opportunities owing to presence of less stringent government regulations and rising government focus across these countries to strengthen the healthcare facilities for the growing population. 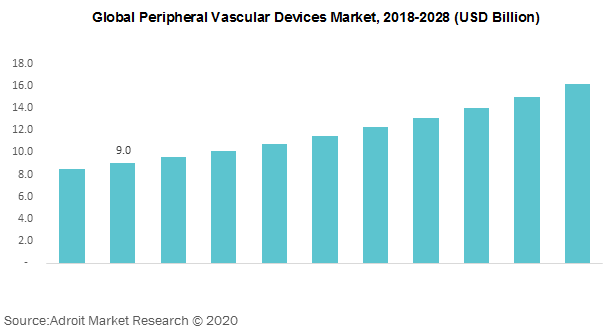 Adroit Market Research report on global peripheral vascular devices market gives a holistic view of the market from 2018 to 2028, which includes factors such as market drivers, restraints, opportunities, and challenges. The market has been studied for the period 2018 to 2028, with the base year of estimation as 2019 and forecast from 2020 to 2028. The report covers the current status and future traits of the market at global as well as country level. In addition, the study also assesses the market competition with Porter's five forces analysis and company positioning based on their product portfolio, geographic footprint, strategic initiatives and overall revenue. Prominent players operating in the global peripheral vascular devices market have been studied in detail.

North America currently holds the largest share in peripheral vascular devices market owing to the presence of significant number of major players across the region along with growing investments by the established firms. However, Asia Pacific is going to record growth at a faster pace on account of growing geriatric population especially across emerging economies such as India, China, and Japan in particular. Furthermore, the market growth across the Asia Pacific region is attributed to rising disposable income coupled with growing healthcare expenditure.