The global inorganic polymers market is estimated to reach the USD 31.69 billion by 2026, at a CAGR of 4% during the forecast period from 2020 to 2026. Polymer is a chemical that is widely employed in almost all industries, including aerospace, medical, packaging, construction, electrical appliances, automotive, and medicinal. A polymer with no carbon in its skeletal structure is known as an inorganic polymer. Low temperature flexibility, electrical conductivity, and nonflammability are all characteristics of inorganic materials. Smart inorganic polymers are inorganic polymers with unique turnable response features. Polymerization, which includes step growth, chai growth, and ring-opening polymerization, is used to produce them.

Inorganic polymers are expected to become more widespread as the global need for inorganic polymer is rising in various end use sectors including electronics and building and construction sectors at a rapid pace. In China, India, the United Kingdom, the United States, Germany, and other countries, inorganic polymers are extensively used. The presence of important companies in these countries, as well as expanding demand for inorganic polymers in a variety of end-use sectors, are boosting in the growth of the target sector in these countries. Furthermore, to obtain a competitive edge around the world, the leading players are focused on new product development, which is a crucial driver driving the market's worldwide expansion. 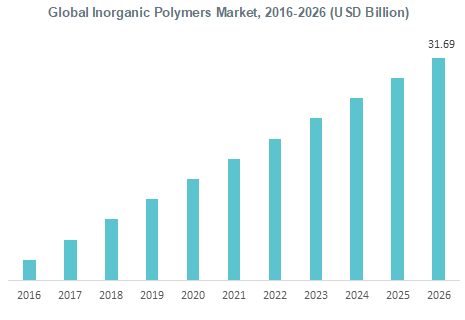 Adroit Market Research report on global inorganic polymers market gives a holistic view of the market from 2016 to 2026, which includes factors such as market drivers, restraints, opportunities and challenges. The market has been studied for historic years from 2016 to 2018, with the base year of estimation as 2019 and forecast from 2020 to 2026. The report covers the current status and future traits of the market at global as well as country level. In addition, the study also assesses the market based on Porter's five forces analysis and positions the key players based on their product portfolio, geographic footprint, strategic initiatives and overall revenue. Prominent players operating in the global inorganic polymers market have been studied in detail.

The worldwide inorganic polymers market may be divided into three main segments including types, class, and applications. The inorganic polymers industry by type includes chalcogenide glass, siliconesm, boron polymers, graphite, and others. On the basis of class the global industry is segregated into polysilanes, polyphosphazenes, polysiloxanes, and polygermanes and polystannanes. The global industry is further divided into building and construction, medical and healthcare, industrial processes, electronics, aerospace and defense, personal care and consumer products among others applications. Medical and healthcare applications are anticipated to grow at significant growth rate owing to increasing demand for these polymers in the manufacturing of various medical devices used in the treatment of COVID-19. These factors are projected to propel the inorganic polymers industry's expansion during the next ten years.