The global facade systems market is anticipated to reach USD 458.25 billion by 2025, growing at a significant CAGR over the forecast period of 2019 to 2025. The market for façade systems is powered by increasing infrastructural and building activities. In addition, the rise in demand for the façade framework from end-use industries further enhances business development. 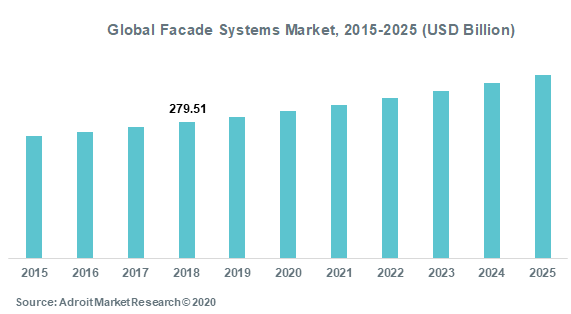 Adroit Market Research report on global facade systems market gives a holistic view of the market from 2015 to 2025, which includes factors such as market drivers, restraints, opportunities, challenges and regulatory scenario. The market has been studied for historic years from 2015 to 2017, with the base year of estimation as 2018 and forecast from 2019 to 2025. The report covers the current status and future traits of the market at global as well as country level.

In addition, the study also assesses the market competition with Porter's five forces analysis and positions the key players based on their product portfolio, geographic footprint, strategic initiatives and overall revenue. Prominent players operating in the global facade systems market have been studied in detail. 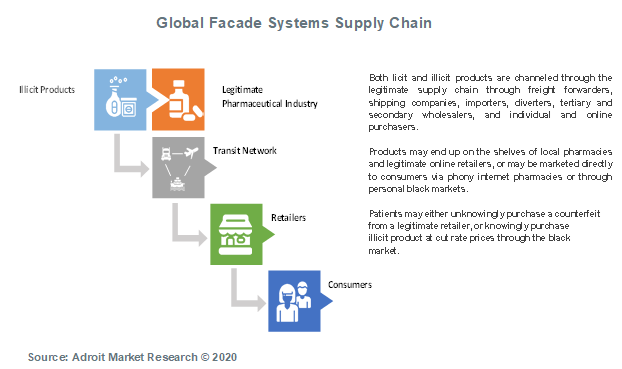 Asia Pacific is a center of international investment and rising manufacturing industries attributable primarily to low-cost jobs, low-cost land supply. The growth in revenue for façade systems can be traced in a significant rise in renovation activities in the building sector. However, the strong growth in visual appeal in the transportation market, has increased the demand for façade systems in the region.

The residential houses using the façade structures are primarily seen in condos, duplexes, dormitories, bungalows, and other house styles. Moreover, the growing need for greenhouse buildings for the usage of facade systems in residential buildings has become more sophisticated and favoured from the last few years.

The global facade systems market is categorized based on type, and end use. Region wise, Asia Pacific was the largest market in 2018, and is anticipated to grow at a significant CAGR over the forecast period. Middle East and Africa is expected to grow at a highest rate over the coming years.