Global Defibrillators Market Is Expected To Witness An Lucrative Growth With A CAGR Of 4.5% Over The Forecast Period 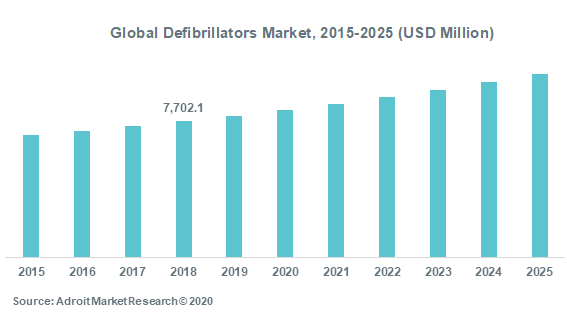 Adroit Market Research report on global defibrillators market gives a holistic view of the market from 2015 to 2025, which includes factors such as market drivers, restraints, opportunities and challenges. The market has been studied for historic years from 2015 to 2017, with the base year of estimation as 2018 and forecast from 2019 to 2025. The report covers the current status and future traits of the market at global as well as country level. In addition, the study also assesses the market based on Porter's five forces analysis and positions the key players based on their product portfolio, geographic footprint, strategic initiatives and overall revenue. Prominent players operating in the global defibrillators market have been studied in detail.

Defibrillators are commonly used to deliver electrical therapy to patients suffering from cardiac arrhythmia. Cardiac arrhythmia is irregular or improper beating of the heart that may increase the risk of sudden cardiac arrest. Rise in mortality rates associated with sudden cardiac arrest has led to increased demand for defibrillators. Defibrillators are majorly used in hospitals, emergency care, ambulance, ambulatory surgical centers, homecare settings, critical care settings, and cardiac centers in order to maintain respiratory and cardiac functions in patients with SCA. Favorable government support such as awareness and training programs for cardiopulmonary resuscitation in developing regions is likely to boost the global defibrillators market over the forecast period.

North America dominated the global defibrillators market in 2018. High incidences of SCA, large patient population with cardiovascular diseases, rapid adoption of technologically advanced defibrillators in the region are key factors likely to drive the growth of the market in the next few years. Asia Pacific will create immense growth opportunities in the future owing to presence of large geriatric patient pool, increase in burden of heart disorders, along with supportive government focused on providing access to AEDs in emerging countries.