The global bread improvers market is anticipated to reach USD 4.85 billion by 2025, growing at a significant CAGR over the forecast period of 2019 to 2025. Growing demand from the consumers for convenience foods such as bread products is expected to fuel growth in the industry.

Adroit Market Research report on global bread improvers market gives a holistic view of the market from 2015 to 2025, which includes factors such as market drivers, restraints, opportunities, challenges and regulatory scenario. The market has been studied for historic years from 2015 to 2017, with the base year of estimation as 2018 and forecast from 2019 to 2025. The report covers the current status and future traits of the market at global as well as country level.

In addition, the study also assesses the market competition with Porter's five forces analysis and positions the key players based on their product portfolio, geographic footprint, strategic initiatives and overall revenue. Prominent players operating in the global bread improvers market have been studied in detail. 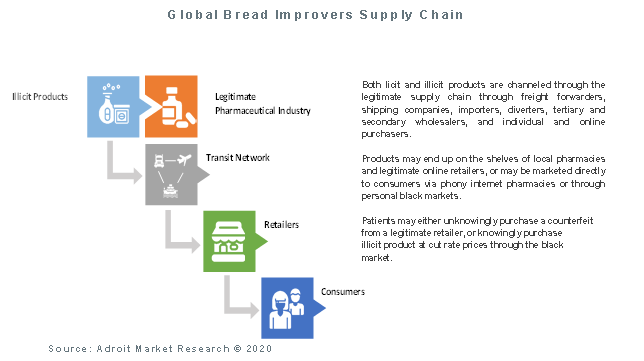 Egg-free is growing as a major primary phenomenon, with most areas of Europe adopting a gluten-free path. Mainly motivated by an growing vegan community in the UK, it is expanding rapidly into the mass industry. The rapid growth of egg-free cake mixes includes bakery improvers such as stabilizers and thickening agents, and it is predicted that bakery improvers should see a increase in demand over the forecast era.

A growing need for a larger variety of bread with ethnic breads being more common in the UK and more types of whole meal breads coming into the market of oats, bran, seeds etc. There is also a increasing trend in several countries throughout Europe including Germany and France to increase the development of sliced and wrapped bread in various varieties.