The global ureteral stents market is projected to reach USD 655.2 Million by 2028, growing at a CAGR of 6.8%. Growing burden of urological conditions, the acceptance of technologically innovative stents for safe and effective urological processes and increasing number of kidney transplants are some of the factors driving the growth of the global ureteral stents market. 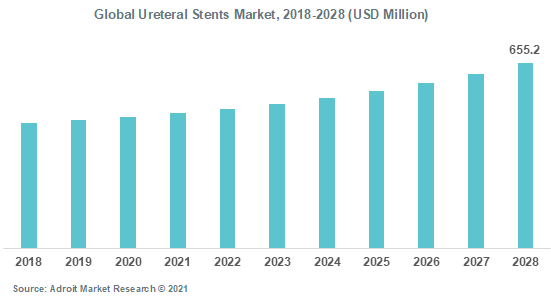 Adroit Market Research report on global ureteral stents market gives a holistic view of the market from 2018 to 2028, which includes factors such as market drivers, restraints, opportunities and challenges. The market has been studied for historic years from 2018 to 2019, with the base year of estimation as 2020 and forecast from 2021 to 2028. The report covers the current status and future traits of the market at global as well as country level. In addition, the study also assesses the key players based on their product portfolio, geographic footprint, strategic initiatives and overall revenue. Prominent players operating in the global ureteral stents market have been studied in detail.

A ureteral stent is a soft tube about 10 - 12 inches long and about as big around as a coffee swizzle stick. It is placed in the ureter, which is the muscular tube that drains urine from the kidney to the bladder. One end of the tube sits inside the kidney, and one end sits in the bladder. The purpose of a stent is to hold the ureter open and maintain drainage of urine. It usually is used temporarily, although in some cases a blockage of the ureter is managed long-term with a stent