Whisky’s complexity, legacy and potential for innovation in craft distilling have rendered it more attractive to a hipster audience globally. Whisky was generally viewed as an older man’s drink. However, across the globe whisky has been witnessing a renaissance, with brands coming up with targeted products keeping the millennials and the hipster population in mind. Along with the targeted demography, the rising disposable income among the middle class population has led to increased purchasing power. Companies branding their products as premium beverages, add a level of sophistication which the people around the world are getting inclined towards.

The global single malt whisky market segmented on the basis of type was dominated by the Scotch whisky segment. This segment generated nearly 60% of the overall market revenue. Single malt Scotch whisky is among the most revered spirits among enthusiasts. It has a vast potential for variation, and it can offer complexity as well as simplicity, subtle whisper or unbridled power. Single malt Scotch whisky needs to be distilled at a single distillery in Scotland to be legally termed Scotch whisky. The high preference of this type is evident from its humongous export value. The U.S. was the largest importer of Scotch whisky and its imports were valued at USD 511.8 million between January and June in 2017. The high demand of Scotch whisky has led to the opening of new distilleries. In 2017, 10 new distilleries were opened to meet the rising demand from the global market. 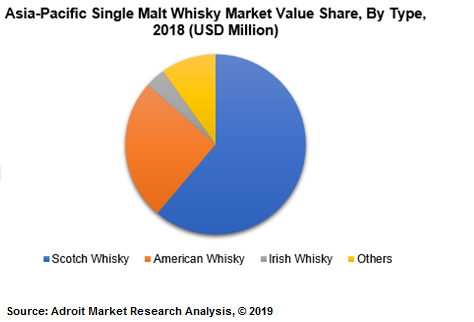