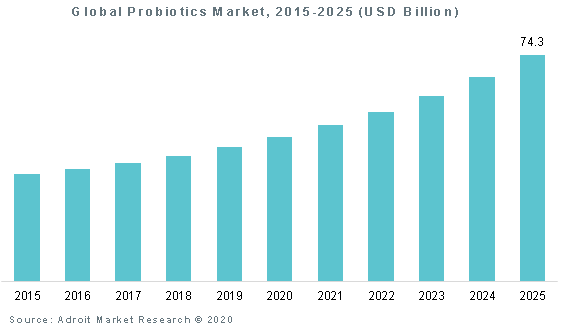 The market research on global probiotics market published by adroit market research, comprises of a detailed research of the market from 2015 to 2025. Including factors such as market drivers, challenges and opportunities. The market considers a historic timeline of 2015 to 2017, 2018 being the year of estimation and forecast period of 2019 to 2025. Key players operating in the global probiotics market have been studied in detail.

The global probiotics market is categorized based on application, end-use industry, ingredients. Based on the application segments, the food & beverage segment is estimated to account for the largest share in the probiotics market in 2018. The products in this group include foods & beverages, which, due to their unique ingredients, provide distinct health benefits beyond basic nutrition. The food & beverage sector is the main income-earning industry in all regions which accounts for approximately 68.25% of the total market share.

The yeast segment is expected to be the fastest-growing in the forecast era, based on ingredients. The growing demand for products that contain Saccharomyces boulardii, a special tropical leaven with many beneficial effects on human bowel health. Growing awareness of the health benefits of probiotics has guided probiotic yogurt consumption in developing countries like China, Brazil, and India. A variety of probiotic items are sold in Japanese supermarkets, ranging from fortified foods to candy focused on Lactobacillus strains and Bifidobacterium in general.

The growth of the probiotic market is hindered with substantial expenditure in R&D activities and investments in laboratory, testing equipment and high cost for hiring qualified professionals. The scientific validity of the application of probiotics is an achievement in this industry. Probiotic applications are related to health benefits, making it difficult for farmers to obtain a decent income from investments on large initial investments.

Arla Foods, Inc.; Lallemand Inc.; Danone; Nestle; Danisco A/S; and Chr. Hansen are some of the key players operating in the market. These players lead the market space with their global presence through well-established distribution channels. To withstand competition, the key players enter into long term supply agreements with various distribution channels. A key observation over the years is the increasing focus of key players to tap the South East Asian markets owing to the presence of a sizable consumer base in the region.

Global Inorganic Polymers Market is to Reach USD 31.69 Billion Market by 2026
Sep 2021
Rapidly rising number of off-grid areas which typically have limited or no access to grid-connected electricity are expected to fuel the Solar Photovoltaic (PV) Market Growth
Sep 2021
Increasing product development initiatives and innovations in stand-up paddle board technology are major driving factors boosting the growth of global Stand-up Paddle Board Market
Sep 2021
The growing focus towards engaging and empowering the child with a holistic approach of imparting education is boosting the Global Early Childhood Education Market
Sep 2021