August 27, 2019: Adroit Market Research released its research study on “Global Polymer Modified Bitumen Size by Type (Thermoplastic Elastomers, Plastomers) by Application (Road construction, Roofing, Others) by Region and Forecast 2019 to 2025”. The study covers the global market value and volume for the period ranging in between 2015 to 2025, where 2015 to 2017 imply the historical value, with 2018 as the base year and forecast period as 2019 to 2025. The global polymer modified bitumen market report also includes qualitative insights of the market such as market dynamics, company overview and financial performance.

Global polymer modified bitumen market size was valued at USD 6,862.7 million in 2018 and is expected to reach USD 9,805.3 million by 2025, at a CAGR of 5.3% over the forecast period. Increasing economic development in economies such as India, China, Southeast Asia, and Brazil, followed by supportive government investment for roadways and infrastructure development projects is expected to drive the polymer modified bitumen market concentration over the forecast period. Bitumen is one of the oldest recognized engineering products. Bitumen has a considerable industrial history, as it had been used in many ways, including as an adhesive, screening agent, preservative, washing agent and pavement binding agent. The chemical composition of manufactured bitumen is very complicated and variable; and it is strongly linked to crude oil sources and refinery procedures. Some outstanding bitumen features can be achieved by selecting high quality crude oil or suitable refinery processes. The limited petroleum resources as well as lack of effective refinery controls however increase the focus on bitumen alteration thus achieving a better financial benefit to the market. . .

Different floor kinds involve different demands for performance.. Only when the technology is economical can people maximize their benefits and become renowned. In the case of modified polymer bitumen, the costs are high when the polymer is taken, whereas the quantity of polymer generally affects the final degree of performance of modified polymer bitumen. The designers must therefore know how efficient roads need to be before building, and whether and how much PMB should be used.

The improving characteristics refer to how fresh additional additives can be developed and developed. Although the present use of functional and reactive polymers in modifying bitumen is restricted by variables, functionalization is captured as a potential growth in the near future. However, it is worth perceived, when functionalization leads to enhanced polymer-bitumen or polymer-modificated bitumen adherence, that the increased physical interactions appear easily attainable and controllable. This is because neither bitumen nor aggregates are chemically active under very elevated temperatures or natural exposure to the surroundings after artificial refining. Physical interactions in the process of functionalization are therefore much simpler to accomplish and regulate. New extra additives could assist to improve the polymer modified bitumen properties by generating more effective compatibilizers, antioxidants and adhesive enhancers. The costs of enhancing the characteristics are definitely risen, resulting in a more cost-efficient modified bitumen polymer and the extra expenses are thus allowed. 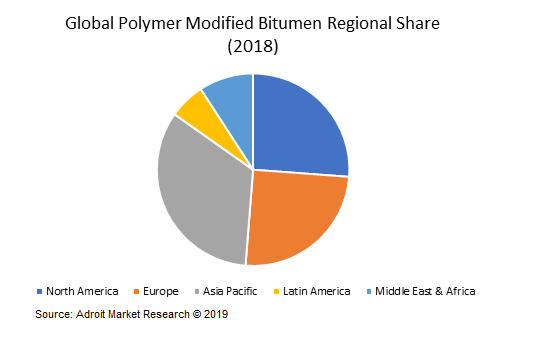 The global polymer modified bitumen market is likely to be driven by significant product consumption in Asia Pacific, Europe, and North America, during the forecast period. Asia Pacific constituted the largest revenue share of 33.5% in 2018 followed by North America. The rise in construction activities in key Asia Pacific countries such as China, India, and ASEAN is expected to boost the consumption of construction materials such as concrete and bitumen over the forecast period.

Significant road construction activities coupled with a steady housing construction is expected to boost the consumption of polymer modified bitumen market over the years ahead. Support from the federal and state governments in the construction of roadways and highways, as a consequence of increasing public transits via roadways, has contributed considerably towards the growth of the construction industry in North America. Los Angeles, Vancouver, New York, San Francisco, San Jose, Toronto, Seattle, Miami, Chicago, Washington, Montreal, Ottawa, and Atlanta are some of the top cities in North America that experience heavy traffic loads.

In the U.S., a significant increase in public and private sector partnerships for highway infrastructure development has been witnessed over the recent years. In 2018, the public sector in the country spent more than USD 90.0 billion on construction of roadways and highways. The spending value is likely to surpass USD 100 billion in the next three years, with strong growth in nearly 20 states in the country. In order to sustain heavy transits, development of roadways requires use of efficient use of construction materials that not only enhance the performance of road surfaces but also the durability to sustain climatic variations. These requirements are expected to offer a favourable scope for consumption of polymers that enhance the rheology of asphalt or bitumen over the years ahead. The non-building construction sector has witnessed steady expansion in Canada since the last few years. According to Oxford Economics, the total infrastructure investments in Canada reached USD 187,800 million in the last five years.