Omega-3 fatty acids are found in a variety of foods, including fish and flax seeds. These goods, which are regarded as an essential supply for the human body, have seen a surge in popularity in recent years.

The Omega 3 Fatty Acids market size is anticipated to reach up to USD 1.92 Billion by 2028, at a CAGR of 13% over the forecast period 2021 to 2028. Polyunsaturated fatty acids (PUFAs) with a carbon double bond in their organic structure are known as omega-3 fatty acids. Meat, eggs, seal oil, krill, fish, and mammalian brains and eyes are examples of plants and marine life that contain these compounds. Eicosapentaenoic acid/docosahexaenoic acid (EPA/DHA) is the most prevalent and commonly used dietary form of omega-3 fatty acids, with a high proportion of EPA/DHA. Omega-3 fatty acids are health-promoting essential fatty acids that the body cannot make but are required for normal metabolic processes and functioning. Both omega-3 versions are useful for stress reduction.

Because of the world's increasing economic development, the worldwide Omega 3 fatty acids market will do well. In addition, the market for Omega 3 fatty acids would develop due to an increase in demand for supplements and functional foods over the forecast period. Emerging economies, such as India, China, and other Asian countries, are increasing their expenditure in the pharmaceutical sector, luring large market players to invest in these areas. However, the restricted supply of fish that contains Omega 3 fatty acids, as well as increased levels of contamination in fish, may function as a stumbling block to the market's expansion.

In Europe, the pet and animal feed business has shrunk significantly, but other applications such as supplements and functional meals, as well as newborn formulas, have grown. Despite the fact that the European market is mature, the vast majority of consumers do not consume enough EPA and DHA to maintain their health. As a result, demand for EPA and DHA supplements will rise in the projected period as the benefits of these supplements become more widely recognized, adding to the expansion of the Omega 3 fatty acids market. Supplements and functional foods use the most Omega 3 fatty acids oil, followed by pet and animal feed, newborn formulae, and medications. Pharmaceuticals, infant formulae, and pet & animal feed follow supplements & functional food in terms of value. Because of the multiple nutritional benefits necessary for infant growth, the infant formula segment is predicted to increase at the fastest rate during the projection period. 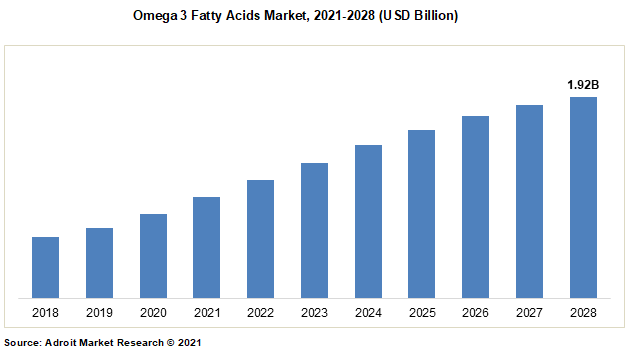 The market analysis by Adroit Market Research delivers an extensive evaluation of the market. This is accomplished via the use of extensive historical data, qualitative insights, and accurate market size estimations. The forecasts in the study were created utilizing tried-and-tested research techniques and assumptions. As a consequence, the research study functions as a library of market data and information for the whole industry. The report provides a thorough picture of the current market environment, including historical and predicted industry size in terms of volume and value, macroeconomic variables and market regulating factors. The report includes a detailed assessment of the Omega 3 Fatty Acids market for the forecast era, 2021 to 2028 and studies the historical developments for the years 2019-20, wherein 2020 is the base year of estimation. The forecast period has been set at 2021 to 2028 for maximum transparency of industry developments. The research includes detailed information on the strategies of the industry leading players, as well as a thorough examination of the various market segments and geographies. The report examines the worldwide Omega 3 Fatty Acids market and its developments across several business verticals and geographies. Its goal is to evaluate the present market size and future growth potential of the Omega 3 fatty acids market across several areas.

On the basis of type segment, the market is divided into three types: eicosapentaenoic acid (EPA), docosahexaenoic acid (DHA), and alpha-linolenic acid (ALA) (ALA). The combination of DHA and EPA helps to lower bad cholesterol and coronary heart illnesses like strokes and blood pressure, which is projected to drive growth in these categories. Rising rates of heart disease among people as a result of a sedentary lifestyle are expected to drive up demand for omega 3. Increasing aquaculture activities, particularly in Asia Pacific, are expected to stimulate demand for omega 3 feeds, thanks to sufficient farmed land and excellent climatic conditions.

On the basis of Application Segment, Adults increasing use of dietary supplements to maintain fitness and nutrient sufficiency is expected to increase omega 3 usage in dietary supplement products. The pharmaceutical industry's widespread use of omega 3 is expected to drive the pharmaceutical application segment in the coming years. Omega 3 is used to treat depression, cancer, Alzheimer's, osteoporosis, and cardiovascular illnesses due to its anti-inflammatory effects. Furthermore, the segment is expected to be driven by an increase in the use of omega 3 in the production of pharmaceutical-grade capsules to treat obesity.

On the basis of the source segment, the omega 3 industry is divided into two categories based on the source: marine sources and plant sources. people become more aware of the dangers of high triglyceride diets, demand for omega 3-fortified foods is expected to rise. Human physiology is made up of three forms of omega 3 fatty acids: docosahexaenoic acid, eicosapentaenoic acid, and alpha-linolenic acid. The first two omega 3 acids are usually found in marine oils, whereas alpha-linolenic acid is primarily found in plant oils. Due to the scarcity of EPA and DHA in plant-based sources, major players in the industry are developing marine-based EPA and DHA products.

On the basis of the regional segment, North America, Europe, Asia Pacific, Latin America, and the Middle East and Africa are the five primary regions studied in the worldwide omega 3 fatty acid market analysis. The Asia Pacific omega 3 fatty acid market, among the aforementioned regions, is expected to increase at a high rate throughout the forecast period. The increase is due to the rising popularity of healthy products along with rising consumer per capita income across the area, particularly in nations like India and China. Furthermore, the growing population is boosting the omega 3 fatty acid industry throughout the region.