Network Appliances Are Pieces Of Hardware That Help The Flow Of Data Between Other Networked Computing Systems. Caching, Authentication, Firewall Functionality, IP Address Management, And Network Address Translation Are All Functions Provided By Network A

The global Network Appliances market size is anticipated to reach up to USD by 101.59 billion at a CAGR of 4.94% over the forecast period. As technology progresses, network appliances' capabilities and range are expanding. Because of the increased use of broadband internet, communications service providers are scrambling to increase capacity and improve remote user performance. For an old power utility to adapt and evolve into a modern substation automation system with smart grid technologies, rugged computing platforms with faster processors and reliable storage capacity are necessary. High-performance hardware is required to provide safe functioning of advanced human-machine interfaces (HMIs) for communication, operator terminals, and SCADA systems. New users and changes in usage habits are to blame for the rise in demand.

Individuals spent more time online and used more bandwidth during the epidemic as a result of video conferencing, telework, and a shift to online shopping channels, not just for items but also for education, health, and enjoyment. Consumption habits have also changed, with increasing demand for home networks and decreased use at work. Between February and March 2020, traffic in Latin America and the Caribbean increased by 70%, 80%, and 170 percent in Mexico, Brazil, and Chile, respectively. In Europe, a large number of people in all countries increased their use of digital channels. Limited capacity and shortages caused problems for users all across the world. Governments and communication firms alike attempted to boost capacity in response to rising demand as a result of these connectivity challenges.

Interventions in diverse areas varies in scope and duration. While infrastructure investments to increase capacity may be implemented over the medium to long term, other measures requiring operators to reduce connectivity costs and congestion may be exceptional and temporary, preserving the regulatory environment's attractiveness for future infrastructure investments. A large number of suppliers dominate the industry, offering worldwide network appliance products. On the basis of quality, security, and solutions, the rivalry among prominent manufacturers is fierce. Operators can safeguard APIs using a variety of approaches, such as authentication, access control, suspicious behavior monitoring, and encryption, which can be utilized in an open or closed system. Automatically installed layer security controls, API security controls, and attack surface monitoring are all possible. This is critical since cyber-attacks are becoming increasingly common. The reality is that reactive security from the past is incapable of keeping up with technology improvements and the new threats they bring. 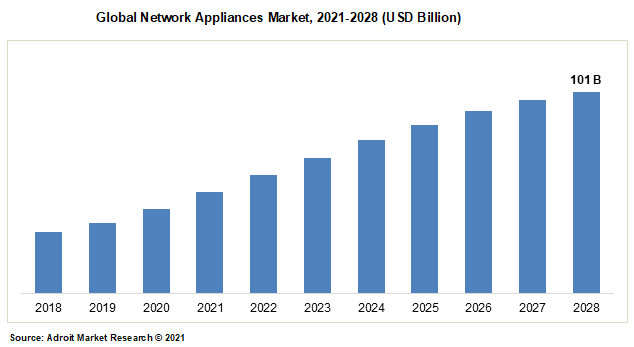 Adroit Market Research report on the global network appliances market offers the current global scenario of network appliances from 2021 to 2028, which includes factors like major challenges, key destinations, challenges, and opportunities. The historic years considered for the study of the market are years from 2019 to 2020 with base year 2020. The forecast years are from 2021 to 2028. The article assesses the global network appliances market considering the analysis and market rankings of key players based on products and service offerings, geographical footprint, and annual revenue of the companies.

The new entrants aimed at future expansion plans with multiple offerings in the market have resulted in market competitiveness with the established players. The market is experiencing fierce competition amongst already established and new players. Interestingly, the fifth-generation broadband cellular network technologies, which are on the market, & the forecasted sixth generation broadband cellular network technologies, which are presently under R&D, are two key information technologies with high expectations to change our contemporary society.