The global fluoropolymer films market is anticipated to reach USD 3.14 billion by 2025, growing at a significant CAGR over the forecast period of 2019 to 2025. The market is powered by growing demand for fluoropolymer films for the manufacture of semiconductors, laminates, wire & cables, electronic screens, release liners, and composite moldings from various applications, such as electrical & telecommunications, automotive & aerospace, construction, and medical & medicinal.

Adroit Market Research report on global fluoropolymer films market gives a holistic view of the market from 2015 to 2025, which includes factors such as market drivers, restraints, opportunities, challenges and regulatory scenario. The market has been studied for historic years from 2015 to 2017, with the base year of estimation as 2018 and forecast from 2019 to 2025. The report covers the current status and future traits of the market at global as well as country level.

In addition, the study also assesses the market competition with Porter's five forces analysis and positions the key players based on their product portfolio, geographic footprint, strategic initiatives and overall revenue. Prominent players operating in the global fluoropolymer films market have been studied in detail. 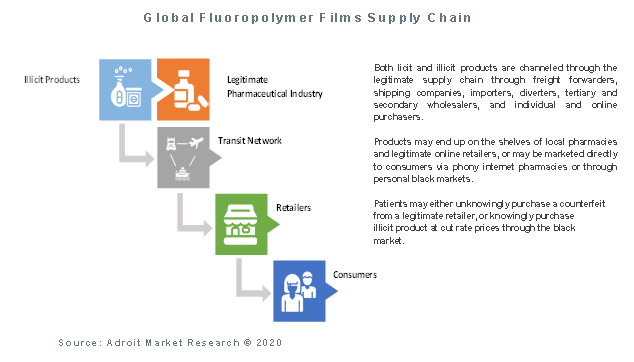 Fluoropolymer films are used in a number of medical & medicinal uses, including cap liners, stoppers, surgical release liners, surface laminates, fluid containers, orthopedics, plunger laminates, braces, and prothetics. However, the properties such as outstanding chemical inertness, minimal absorption and UV & environment tolerance of moisture relative to traditional films such as nylon, polyethylene, and polypropylene, have gradually increases its use in many applications. Also, the outstanding chemical stability and the potential to resist allergic reactions in contact with the human body has anticipated its demand in the global market.