Increasing Demand For Flotation Reagents In Construction, Mining, And Processing Plants Is Expected To Drive The Global Flotation Market In The Forecasted Period.

The global flotation reagents market is estimated to reach USD 7.1 Billion by 2028, at a CAGR of 5.8 % during the forecast period from 2021 to 2028. Increasing applications in industrial flooring and increasing demand from the marine industry are driving the market growth. Stringent environmental regulations and other restraints are expected to hinder the growth of the market studied

Explosives & drilling is a major segment that is likely to experience the highest CAGR during the forecast period. Drilling is benefitted by the relaxation flotation reagents caused in the earth and which acts as a non-abrasive method for recovering precious minerals without causing weathering on their surfaces.  The water and wastewater treatment segment held the largest market share in the year 2020. This is owing to the major policies and rules regarding the cleaning of industrial effluents and wastewater. Various investors are encouraging the utilization of these chemical reagents along with the support from governing bodies, which is promoting the growth of this market.

Geographically, countries such as Japan, United States, India, China, Germany, and some others are among the largest consumers of flotation reagent products. The growth of population is significantly high in these countries along with the corresponding need for construction of building ultimately leading to consumption of flotation reagents market. 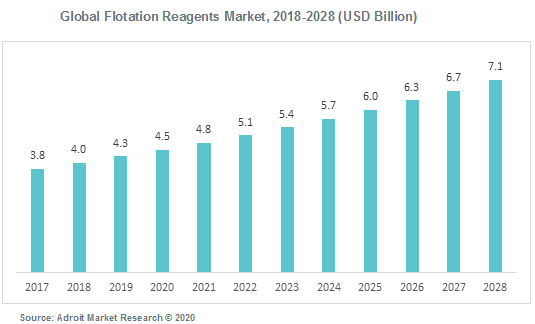 Adroit Market Research report on the global flotation reagents market gives a holistic view of the market from 2018 to 2028, which includes factors such as market drivers, restraints, opportunities, and challenges. The market has been studied for historic years from 2018 to 2020, with the base year of estimation as 2020 and forecast from 2021 to 2028. The report covers the current status and future traits of the market at the global as well as country level. Also, the study assesses the market based on Porter's five forces analysis and positions the key players based on their product portfolio, geographic footprint, strategic initiatives, and overall revenue. Prominent players operating in the global flotation market have been studied in detail.

The COVID-19 pandemic is having a significant impact on the flotation reagents industry. Demand for the product is suffering severe shocks across various end-use markets, worldwide supply chains are upset, and the competitive order of manufacturers/producers has witnessed a change. The shortage of demand has fast-tracked the global chemical sector into an oversupply situation. Movement restrictions appear to be a direct and immediate effect, and once the compulsory social distancing ends, it is expected things would get back to normal conditions.