Global Explosives And Pyrotechnics Market Is To Reach USD 23.71 Billion Market By 2026

The global explosives and pyrotechnics market is estimated to reach the USD 23.71 billion by 2026, at a CAGR of 4.1% during the forecast period from 2020 to 2026. Explosives, sometimes known as explosive materials, are flammable chemical compounds, combinations, and devices. They contain a tremendous quantity of potential energy that, when released by light, sound, pressure, or heat, can cause an explosion that is considerably greater than the initial material. Explosives are often classified into two types: high explosives, which are employed in defence and military applications, and low explosives, which decompose or burn into gas. Some of the most powerful explosives used in military, industrial, and mining purposes include trinitrotoluene (TNT), acetone peroxide (TATP), RDX, and aziroazide azide. 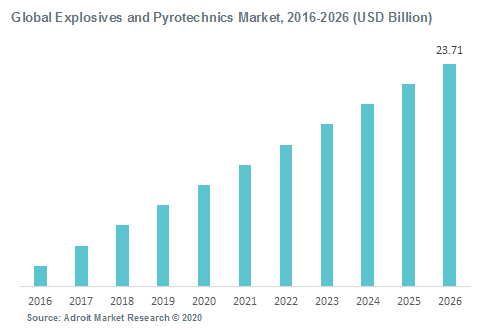 Asia Pacific led the worldwide explosives and pyrotechnics market. In the India, China, and other Asian countries, explosives and pyrotechnics are becoming increasingly frequently adopted due to growth in the mining activities in emerging economies for coal. One of the key factors driving explosives and pyrotechnics growth in developing nations is the rapidly expanding demand for the target explosives product among growing economies throughout the world. Furthermore, throughout the projection period, North America is predicted to have considerable expansion in the target industry. The presence of major players in the area, as well as technology developments among American countries, notably in the U.S. will augment growth of the global industry. Sasol Limited, Orica Mining Services, ENAEX, AECI Group, Austin Powder Company, Titanobel SAS, Incitec Pivot, LSB Industries, Chemring Group, and Hanwha Corp. are all major participants in the worldwide explosives and pyrotechnics industry. Advanced products launches and other organic as well as inorganic strategies adopted by the major operating players will create huge growth opportunities.

Key Segments of the Global Explosives and Pyrotechnics Market