The global Coconut market is estimated to reach USD 101.96 Billion by 2028, at a CAGR of 5.8% during the forecast period from 2021 to 2028. Increasing demand from the healthcare industry is one of the major factors that assist in driving the growth of the market. Furthermore, the rising consumption of coconut-based products in the general public is another driving factor that further promotes the growth of the market. However, low shelf life of coconut  based product followed by high price is the major factor which restrict the growth of the market. Nonetheless, ongoing research and development in the field of virology will bring huge growth opportunities during the forecasted year.

Coconut oil has high world demand as an important ingredient in various  type of cosmetics, soaps, hair oils, body oils and in different type of food products and has surged in popularity because of its numerous health benefits. Coconut oil is one of nine internationally traded vegetable oils and ranks eighth in global production. Nearly one third of the world's population depends on coconut for nutrition and trade. The UN Food and Agriculture Organization reports the top producers are the Philippines, Indonesia, Brazil, and India. Production is based in Southern Asia, Central and South America, Oceania and southern Africa; Asia accounts for 84 percent. Coconut oil is a "functional food" that is popular in traditional medicine in Asia and used worldwide to treat a wide variety of health problems from abscesses to upset stomachs. Scientific studies have found it effective for treating enlarged prostate and improving serum cholesterol.

An unexpected problem hit the ground in a form of the COVID 19 pandemic. The virus first discovered in 2019 in China, and later it spread across the whole world. The demand for essential products increases rapidly. The whole world looking after the manufacturing of health-related products. The demand for food item remain quite stable. The COVID 19 pandemic shown a no major impact on the coconut market and this pandemic curb the growth of the market for a limited period of time.

Based on type, the Coconut market is classified into seven types Coconut water, Coconut Oil, Coconut Milk, Coconut Snacks, Coconut Desiccated, Coconut Fiber, and Others. Coconut oil accounts for the largest market share in the year 2020. It is estimated that Coconut oil holds more than 17% of the global coconut market. Increasing demand from the food, healthcare, and beverages industry is the driving factor that increases the demand from the global market. The cosmetic industry also plays a major role in increasing the demand for coconut oil consumption. Apart from this, the wide application of the product making him remain in continuous demand across the global market. The quality of products varies from region to region, but still holds an important position in all industries.

Some of the other factors that assist in continuous demand for coconut and coconut-based products are the rising per-capita income of the developing countries. The nutritional value of the products provides an additional boost to the coconut market.

Based on the end-users, the global Coconut market is classified into five types Food & Beverage, Cosmetics, Healthcare Types, Textile, and Others. The Food segment holds the largest market share in the year 2020. The same segment will dominate the global coconut market during the forecasted year. The wide application of coconut in the food industry is one of the major factors associated with the growth of the market. Furthermore, rapid urbanization and large-scale production further add demand across the global market in the food industry. 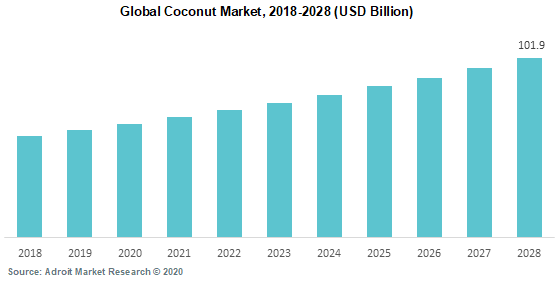 Adroit Market Research report on global Coconut market gives a holistic view of the market from 2018 to 2028, which includes factors such as market drivers, restraints, opportunities and challenges. The market has been studied for historic years from 2018 to 2019, with the base year of estimation as 2020 and forecast from 2021 to 2026. The report covers the current status and future traits of the market at global as well as country level. In addition, the study also assesses the market based on Porter's five forces analysis and positions the key players based on their product portfolio, geographic footprint, strategic initiatives and overall revenue. Prominent players operating in the global Coconut market have been studied in detail.

The global Coconut market report is classified into five major regions North America, Europe, Asia Pacific, Latin America & Middle East, and Africa. In terms of revenue. American region accounted for more than 11% market share of the total Coconut market in the year 2020. The continuous growing demand in the American region will bring huge growth opportunities during the forecast period. The consumption of coconut is quite low in the European region. Less supply in the region is the major factor for the low demand for the products.

The Asia Pacific holds the largest market share in the year 2020. At present, Indonesia, the Philippines, and India are the major Coconut producing countries. India, Indonesia, and the Philippines are contributed world 76% of the total coconut oil producers. The Asia Pacific holds approx. 60% of the total world population. Such a market will be considered as futuristic opportunities for the forecast period. In Latin America, Brazil and Mexico are the major producers as well as consumers of coconut and related products.

The market of the middle east is also growing. Import of food products like chips, snacks from the Asia pacific leads to the increased market share of the coconut industry.