Armored Vehicles are one of the important and widely used in the defense industry. They are available in various types. Electric and conventional based. Due to technical advancement, electric-based products are under penetration in the various countries' defense industries. Some vehicles are wheel based or some follow the continuous track. Canon tanks are track-based vehicles where the trucks are mostly wheel based. The vehicle is highly protected and made up of thin sheets of steel. In a continuous technological advancement followed by the recent development, the products are available in manned operated or unmanned operated.

An unexpected problem hit the ground in a form of the COVID 19 pandemic. The virus was first discovered in 2019 in China, and later it spread across the whole world. The demand for healthcare products rises rapidly. The whole world looking after the manufacturing of vaccines. Furthermore, all the employees are forced to do work at home for safety purposes. There is increased demand for food and food-related products. The countries have seen the disturbance in the supply chain and affect the distribution of the products. Looking at the current demand for the products, the demand for armored vehicles will remain stable. The COVID 19 pandemic has shown no major impact on the Armored Vehicles market.

Based on the platform, the armored vehicles market has been segmented into combat vehicles, combat support vehicles, and unmanned armored ground vehicles. The combat vehicles hold the largest market shares in terms of revenue generation. The same segment is expected to grow during the forecasted year from 2021 to 2028. The combat vehicles segment contributes more than half of the total market share in the year 2020. The high demand for the various Armored Personnel Carriers (APCs) and Light Armored Vehicles is one of the major driving factors promoting the growth of the market. 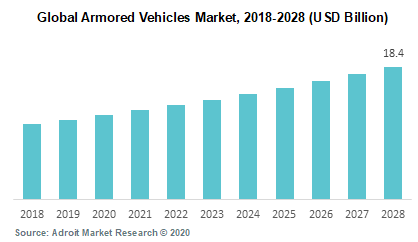 Adroit Market Research report on global Armored Vehicles market gives a holistic view of the market from 2018 to 2028, which includes factors such as market drivers, restraints, opportunities and challenges. The market has been studied for historic years from 2018 to 2019, with the base year of estimation as 2020 and forecast from 2021 to 2028. The report covers the current status and future traits of the market at global as well as country level. In addition, the study also assesses the market based on Porter's five forces analysis and positions the key players based on their product portfolio, geographic footprint, strategic initiatives and overall revenue. Prominent players operating in the global Armored Vehicles market have been studied in detail.

The global Armored Vehicles market report is classified into five major regions North America, Europe, Asia Pacific, Latin America & Middle East, and Africa. In terms of revenue, North America holds the largest market share in the year 2020 followed by Europe. The  Asia-Pacific region is expected to witness the highest growth during the forecast period. China, India, Australia, South Korea, Singapore, and Japan are generating significant demand for new armored vehicles. The high demand from India and China which hold the world's largest army is the major driving factor that promotes the growth of the market. The demand is primarily to replace an aging fleet that has been in operation for over 30-40 years.

For instance, in 2017, the Singapore Ministry of Defence awarded a contract to ST Kinetics to produce Hunter AFVs. The Hunter AFV was commissioned by the Singapore Army in June 2019 and replaced the Singapore Army’s aging M113 Ultra armored vehicle, which has been in service since the 1970s. In February 2021, the Indian Army placed an emergency procurement order worth USD 24.4 million for M4 armored vehicles from the Kalyani group. The new armored vehicles will support the Indian Army to transport troops faster and operate in high-altitude regions. In Latin America, Brazil holds the largest market share in the year 2020. The high army budget of the Brazil and up-gradation of the army are the major driving factor which promotes the growth of the market. In the Middle East and Africa, Saudi Arabia is one of the major importers of the Armored Vehicles Market. For instance, on April 2020 the Canadian government finals the contract of light armored vehicles