Energy storage is a serious component of manufacturing industry, service industry, future renewable energy industry and all the portable electronic devices with which we all have become obsessed. Without the modern electrochemical energy storage such as lithium-ion batteries, the decade of smartphones and laptops would not have progressed like it actually did. Above and beyond entertainment, batteries plays a perilous role in high-tech manufacturing industry where it is indispensable to have an uninterruptable power supply with constant and steady frequency. It is testified that more than USD 80 billion is lost by several industries in the U.S. each year due to power interruptions. Also,

Energy storage is a serious component of manufacturing industry, service industry, future renewable energy industry and all the portable electronic devices with which we all have become obsessed. Without the modern electrochemical energy storage such as lithium-ion batteries, the decade of smartphones and laptops would not have progressed like it actually did. Above and beyond entertainment, batteries plays a perilous role in high-tech manufacturing industry where it is indispensable to have an uninterruptable power supply with constant and steady frequency. It is testified that more than USD 80 billion is lost by several industries in the U.S. each year due to power interruptions. Also, a renewed consideration has been given to the electrification of the transportation sector wherein electric vehicles subjugated the transportation sector for a short period in the beginning of the 20th century. Originated by the success of Toyota Prius electric vehicle, the plug-in GM Volt and the all-electric Nissan Leaf then penetrated the market. Also, following this, the hybrid bus entered the fleet, with over 30 million miles driven on Li-ion batteries. Thus, increasing penetration of batteries in household, industrial and commercial applications is expected to drive the overall demand for efficient battery storage systems in the foreseeable years. The intent of this whitepaper is to describe the costs, technologies, opportunities and values for electrochemical energy storage systems. Another key driver is the need for new infrastructure to modernize and expand the grid. The grid in developing economies needs to have aging infrastructure modernized and to be expanded to be able to serve rapidly growing populations and to bring power to an estimated 30 percent of the global population without access to electricity. According to the United Nations Sustainable Energy for All initiative (SE4All), $45 billion in investment through 2030 will be required to provide universal access to modern electric power. Energy storage is set to play a key role in these investments, enabling better utilization of both new and existing resources as well as strengthening the grid against diverse threats, including natural disasters and physical attacks.

Electrochemical energy storage has been considered as a ‘holy grail’ for the utility industries and grid infrastructure worldwide. Traditional energy storage systems including compressed storage, pumped hydro, flywheels and thermal storage are expected to be overpowered by battery storage in the near future. Demand for battery storage has been exponentially emergent as a result of briskly advancing technologies which are guaranteeing large-scale and self-dependent energy storage. Continuous fall in prices, ease of maintenance & installation and the ability to deploy and set-up virtually anywhere regardless of any specific geographical or locational requirements are some key aspects stimulating the global electrochemical storage industry. Battery storage has witnessed a significant growth over the past few years. Energy storage in batteries is currently pushing the 1 gigawatt mark as compared from a rare hundred megawatts capacity, just a few years back. Major regions such as South Korea, US and Europe are leading the overall electrochemical energy storage growth. Gigantic investments principally in lithium-ion batteries are pouring down the costs while electrochemical energy storage developers are unceasingly getting better at scheming, designing and implementing customized battery storage systems. These developments are being fueled by some more promising markets, improvisation in system costs, favorable regulations, easy access to finance and an intensifying need to exalt the mature grid infrastructure. Also, electrochemical energy storage is still a small section of the overall energy storage market and there is an ample room for additional deployment. Developments in energy storage over the past five years have furnished newer and more useful insights about the potential standards of both emerging and traditional storage technologies and the market areas in which they operate. Independent power producers, utilities, behind-the-meter commercial, residential and industrial customers have implemented energy storage from a kilowatt scale to a megawatt scale to capture a multitude of economic and system reliability benefits across all the regions.

Electrochemical storage comprise of various types of batteries, most of which are technologically mature for practical use. The most commonly used batteries include lithium-ion batteries, lead acid batteries and all flow batteries.

Li-ion batteries possess an unmatchable blend of high power and energy density making it the technology of choice especially for power tools, portable electronics and electric vehicles. Lithium ion batteries have emerged as the most important energy storage technologies in the areas of mobile and portable applications (such as laptops, smartphones, electric cars, electric bicycles, etc.). Li-ion batteries have several advantages over other chemistries such as high gravimetric energy density as well as the panorama of huge cost reductions via mass production. Lithium ion batteries usually have a high efficiency, characteristically in the range of 95-98 %. Approximately any discharge time from a few seconds to several weeks can be recorded and monitored making them a highly universal and flexible storage technology. Yet considering the future, there are several technologists who are uncertain that Li-ion batteries will be able to power the world's needs for portable energy storage in the long run. For certain applications such as grid and transportation, lithium-ion batteries are relatively costlier at present, and a shortage of lithium and some of the transition metals used in lithium-ion batteries may become an issue one day. Since lithium-ion batteries are presently expensive, they can strive with lead acid batteries in such applications which need shorter discharge times such as primary control backup. Although Li-ion batteries account for share of more than 50 % in the small portable devices industry, there are still some challenges for developing larger-scale Li-ion batteries. The main obstacle is the high cost of more than USD 600/kWh due to internal overcharge protection circuits and special packaging requirements.

In traditional secondary batteries, the energy is discharged in the active masses of the installed electrodes. A flow battery is a rechargeable battery, although the energy is stored in more electroactive species which are dissolved in liquid electrolytes. These electrolytes are deposited in external tanks and are then pumped into the electrochemical cell which converts the chemical energy to electrical energy and vice versa. Flow batteries are easily fitted to a broad range of stationary applications. Introduced by NASA in the early 70s for long-term space flights, flow batteries are now gaining traction for storing energy for longer durations with a power up to several megawatts. Flow batteries are further classified into hybrid flow batteries and redox flow batteries. However, flow batteries are too bulky to be used in electric vehicles, although, they have longer lifespans (up to 25 years), and are well suited for industrial and utility applications. Flow batteries stands distinctly in the energy storage market, since they deliver power instantly and store up to hundreds of megawatts of energy usable during peak hours. As per the U.S. Department of Energy’s (DOE’s) global energy storage database, since 2014, more than 30 flow battery projects across 11 countries have been deployed or began construction ranging in power of a tens of kilowatts up to 200 MW (Dalian’s project in China). Flow batteries operate even at 0% charge which makes it ideal and superior over lithium ion (Li-on) batteries for energy storage applications in wind and solar power generation farms.

Up until now, approximately all the data centers depend on valve regulated lead-acid batteries, however, lithium ion battery is set to take a minimum of 10% share of the market till 2022. Lithium ion batteries offer considerable benefits over lead-acid batteries especially the fast charging and highly reliable rates. It ensures sophisticated levels of protection while its capability to endure higher temperatures leads to less energy for cooling. Guaranteeing the smooth operation of data centers is indispensable for businesses in commerce, finance, media and communication. Today’s missioncritical facilities necessitate high reliability on energy and power. Electricity outage at a particular data center can lead to stark repercussions on customer loyalty and reputation for operators and their customers that far exceed the loss of service during the outage and the cost of repairing damaged equipment. One common example was a power outage in May 2017 at a British Airways data center near London Heathrow airport. The power outage caused a ripple effect when a loss of data resulted in the cancellation of 726 flights. While it initially left 75,000 passengers stranded around the world, reports estimated that the operator took 14 days to resume normal flight service. According to research by the Ponemon Institute, the average cost of unplanned outages, including direct costs for hardware, services, lost revenue as well as lost business and reputational damage is $9,000 per minute. However, this can rise to $17,000 per minute for the most data-dependent businesses. The global consumption of energy at data centers accounted for more than 416.2 TWh in 2016, corresponding to around 3 percent of the global energy consumption and nearly 2 percent of the total greenhouse gas emissions.

There are three major data center segments namely enterprise, co-location and cloud. Enterprise data centers are the on-premise or in-house data centers that provide their clients with complete control over the core data and services. A co-location data center, also known as a multi-tenant data center is generally an outsourced facility wherein the clients rent space. Cloud data centers generally operate huge data center setups and are likely to witness huge growth in the foreseeable years owing to increasing demand for cloud-based databases. The combination of growing dependency on data and strict environmental regulations is influencing the data center operators to move towards relatively higher levels of energy efficiency, reliability and performance.

Being familiarized with more profitable applications such as consumer electronics, lithium-ion batteries are now a mature technology when it comes to energy storage. In parallel to the lead-acid batteries, lithium-ion batteries furnishes relatively higher energy density; it can deliver extra power output with lesser carbon footprint and relatively lower weight for even a longer timeframe. Lithium-ion’s share in the global energy storage battery market has witnessed a rapid surge from around 83 percent in the 2013 to more than 88 percent in 2017. The major usage of lithium-ion batteries lie in the uninterruptible power supply application especially deployed for data centers. Several data centers are now totally relying on lithium-ion batteries as their source of energy since they are smartly connected, compact, lightweight, scalable and modular.

Lithium, lead, zinc, sodium, and vanadium are the key raw materials used for manufacturing batteries. Additionally, graphite plays an important role too as it is used for manufacturing electrodes. In past seven years, cost of LIB technology has fallen by 75 per cent from USD 1,000 per kWh in 2010 to USD 250 per kWh today. In the next decade, the price of li-ion batteries is further expected to drop by 60 per cent to USD 100 per kWh. 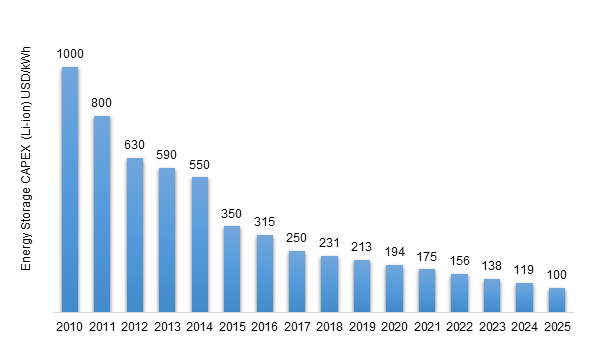 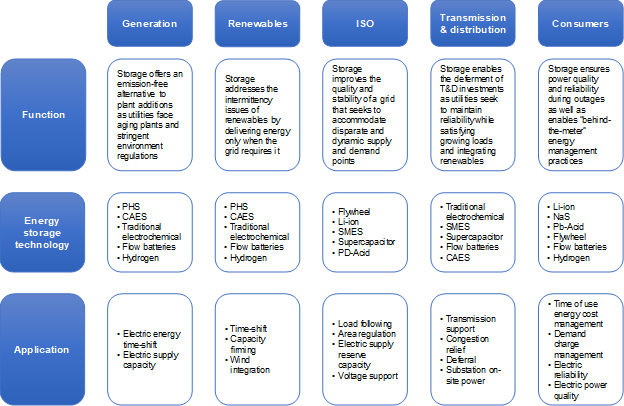 Materials availability is unlikely to be a constraint on the growth of battery electricity storage technologies in the period to at least 2025. Systems for the end-of-life recycling, reuse and disposal of battery packs are being tested and will need to scale in the 2020s

Everything You Need to Know about Abrasives
Apr 2020
Biobanking: Collecting Data to Help Future Treatment and Diagnosis
Apr 2020
The Utility of Real-Time Data with the IoT
Apr 2020
Blockchain Technology a Major Disruptor in Metal Recycling Supplychain Landscape
Apr 2020